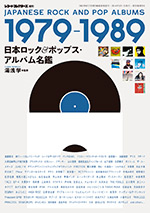 This is the sequel to the very popular “1966-1978”. Not only the “masterpieces” of Japanese rock and pop music, but also indie works, new music, songs, and all sorts of other sound records are lined up in the order of release, giving a clear picture of the atmosphere of the times. In this issue, we have selected 1005 albums from 1979, when YMO broke out and the Tokyo Rockers exploded, to 1989, when the band boomed and Wink became a big hit. All of them are in color, including idol works by Akina and Onyanzi, as well as rare independently produced albums. This is a great book for those who love records and want to listen to records they have never heard before!

1981/1982
Japanese rock pioneers lead the way with their songs

1983/1984.
The booming indie industry and the major companies trying to take advantage of it

1985/1986
Mature singers disappear from the charts, and the onyango crowd takes over